After Tyre Nichols’ death, protesters around the United States have condemned police violence.

by loveth joyce
in ART, culture
0

The president of Nigeria’s National Commission for Museums and Monuments told the BBC that the day the British museum signed over its collection of artifacts stolen from the Kingdom of Benin was “a truly happy day.” With the repatriation of 72 objects, including the so-called Benin Bronzes, to Nigerian ownership, the Horniman Museum in south-east London becomes the first British institution to formally take such a step on such a large scale. “Holding on to plundered things is no longer tenable,” Prof. Abba Tijani stated.

This development increases the pressure on other institutions to address the issue of reparation.

The Egyptian Museum in Turin is offering free admission (and an Egyptologist) to overnight visitors. 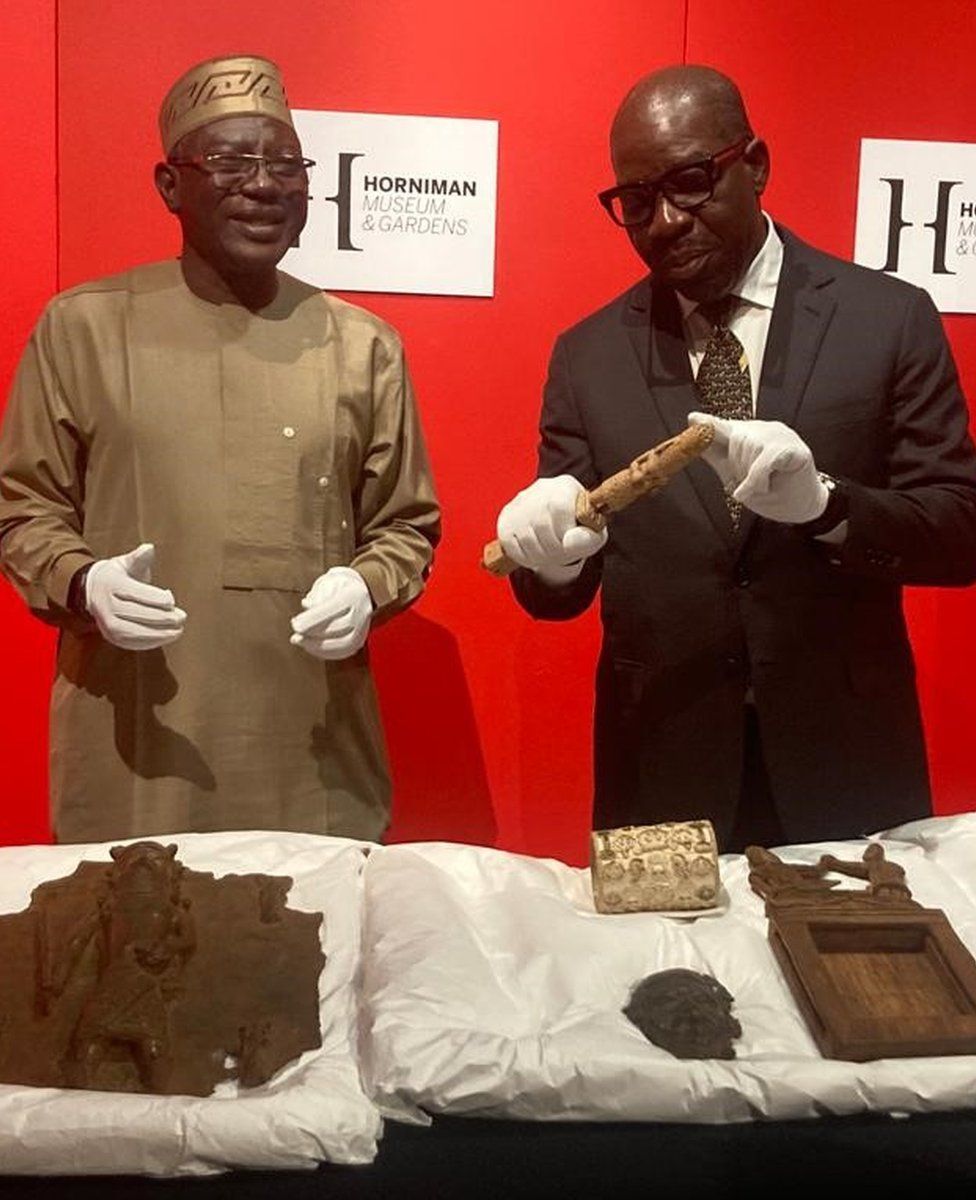 In 1897, the British government sent a huge military expedition to Benin to forcefully remove the artworks from the country.

The city of Benin, in present-day Nigeria, came under invasion and British occupation.

Take a listen to BBC Radio 4‘s Front Row for more on the heated discussion around the Benin Bronzes.
On Monday night, in the presence of Nigerian royalty and other officials, the ceremonial signing ceremony took place, officially giving ownership of the 72 artifacts back to Nigeria unconditionally.

Prof. Tijani, in a public address, lauded the Horniman for its efforts “to repair the past.” 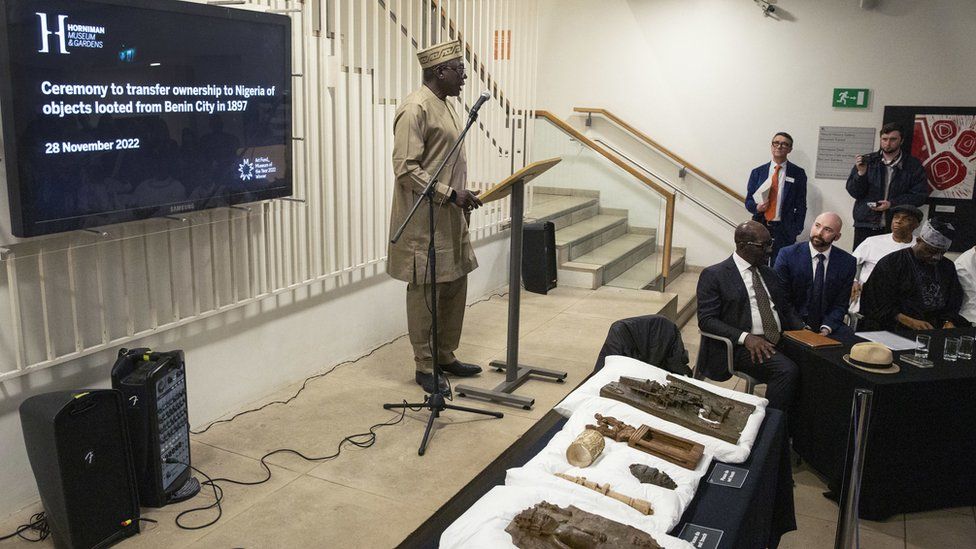 Prof. Abba Tijan Speaks at the Agreement’s Signing
Picture: Courtesy of PA Media
Prof. Abba Tijan, shown here during the signing ceremony, will be delivering the keynote lecture.
Gov. Godwin Obaseki of Edo state, Prof. Abba Tijani, and Michael Salter-Church, head of the Horniman Board of Trustees, during the signing ceremony.
Edo state governor Godwin Obaseki, center, with Prof. Abba Tijani and Horniman Board of Trustees head Michael Salter-Church.
“There was no doubt they’d been robbed — therefore there was a moral justification for their repatriation,” Nick Merriman, director of the Horniman Museum, told the BBC after much investigation and consultation. 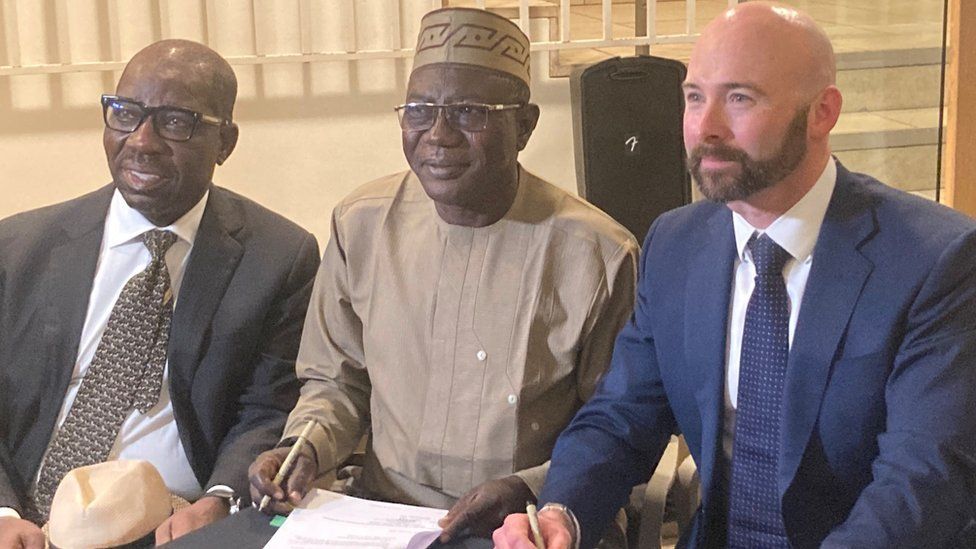 In addition to restitution and repatriation, he believes that museums are increasingly recognizing the colonial past of their respective countries.

A “fuller account of how collections have arrived in British museums,” he continued, would be the result.

It’s worth noting, he added, that the Horniman and other charitable institutions are exempt from such laws because their holdings are on loan to the public.

In order to give Nigeria back its bronze stave from Benin
How to Get the Museum to Consider Returning Looted Artifacts from Africa
Horniman Selected as the 2022 Museum of the Year
There are 900 Benin artifacts at London’s British Museum, and Prof. Tijani said, “I think the British Museum is watching, I believe they are now taking it thoroughly to see that they do something, because every museum throughout the world is saying it is not appropriate for them to hang on to these artifacts.”

He warned that the museum’s collections would “cause me high blood pressure” and vowed to keep pleading with officials to “seriously look at” returning artifacts, suggesting instead that they consider putting them on loan. 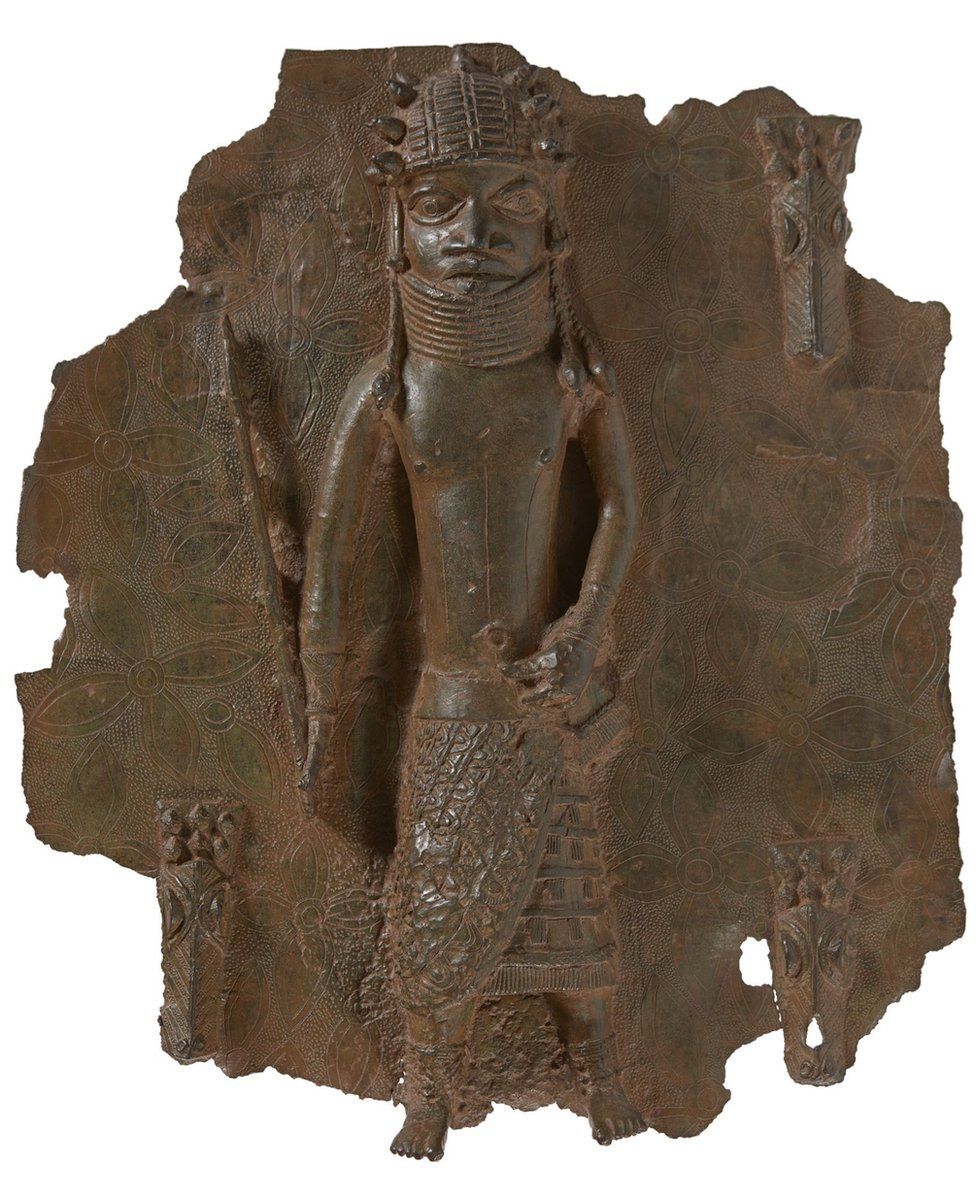 Oba Orhogbua is portrayed in brass on a plaque. Oba Orhogbua (ca. 1550–1578), seen here with the symbol of his power and authority, a staff, is returning the plaque commemorating him doing so.
The Nigerian government’s NCMM has requested that museums all around the world return objects that belong to Nigeria.

The nation’s government has commissioned British-Ghanaian architect Sir David Adjaye to create the Edo Museum of West African Art in Benin City, which will open to the public in 2026 and feature the world’s greatest collection of Benin Bronzes.

At the beginning of 2022, the NCMM contacted Horniman. The trustees of the Horniman Museum and Gardens concluded that returning the artworks was “moral and suitable,” and their decision was supported by the Charity Commission. Six of them are going back to Nigeria. All the remainder of the collection is still over in London where it was originally loaned from.

In 1897, soldiers ransacked and torched the Benin Royal Palace while plundering it for valuables. The Oba (King) was driven into exile.

When this violent incident occurred, it was said to be in response to a prior assault on a British trade mission a month before.

Now, many see it from the broader perspective of Britain’s efforts to dismantle a prosperous trade competitor and grab its assets. Before Nigeria’s independence in 1960, the British Empire annexed Benin and absorbed its population.

Sculptures in the kingdom are some of the most intricate and ornate in the world. Over a span of 600 years, skilled artisans serving the royal court in the kingdom’s main city created these priceless works of art.

These items range from exquisite human and animal figurines to ivory and brass ceremonial pieces and imperial regalia.

The Benin Bronzes, a collection of plaques that formerly adorned the palace’s walls, serve as a crucial historical record of the royal court and realm. 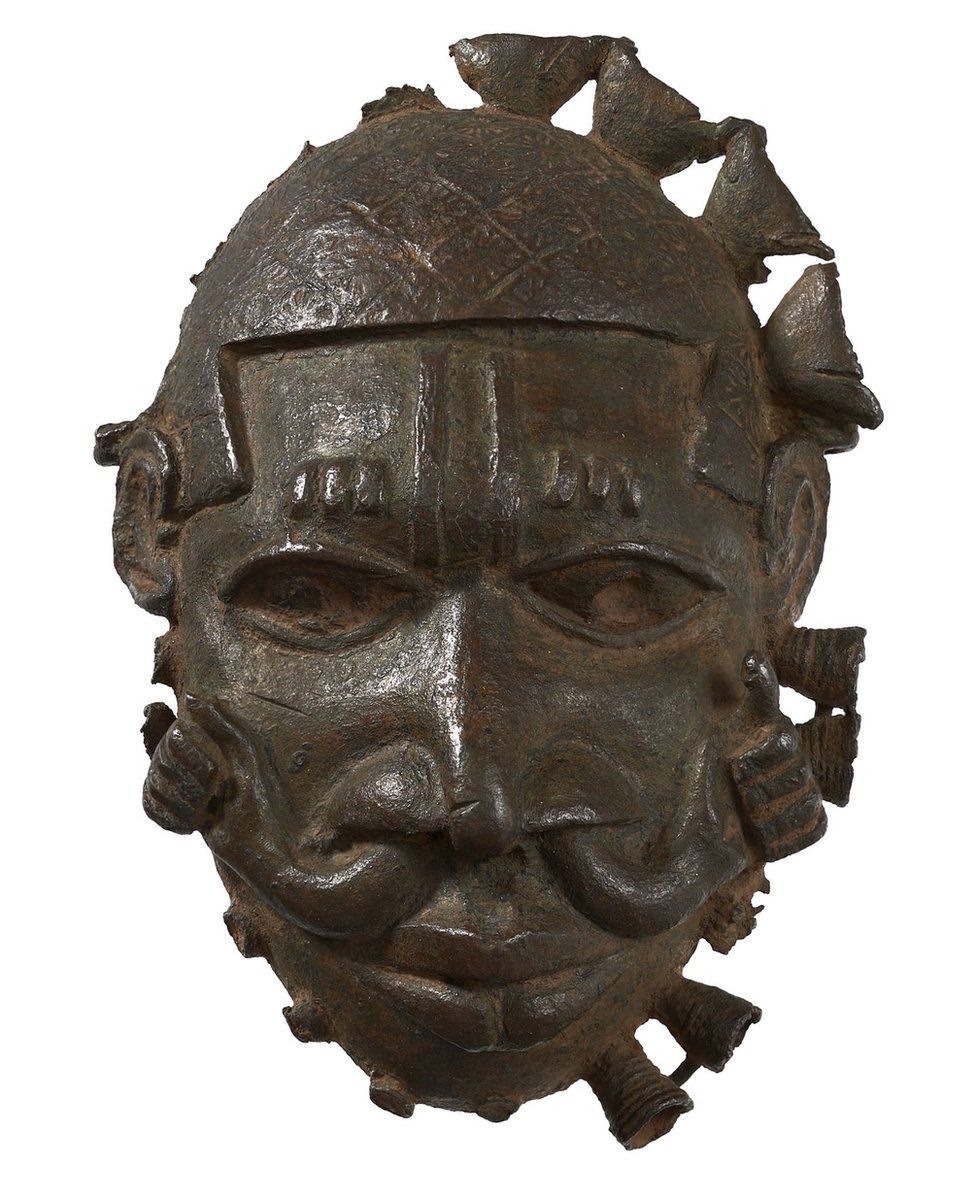 Mask or facade made of brass
HORNIMAN MUSEUM AND GARDENS, WHERE THE PICTURE WAS TAKEN.

A brass hip decoration in the shape of a face or mask, with a protruding arm from each nostril.
On Monday, during the signing ceremony in London, Prince Aghatise Erediauwa, a representative of the Oba of Benin, claimed that the 1897 assault was “the most heinous act of terrorism” in Benin’s history “this is still a sore spot for us in Benin. We pass on the lessons of the past to the next generation “.

However, he found it encouraging that “the narrative is now shifting, on ethical reasons, on moral grounds, on legal grounds,” with a growing consensus “that items that were stolen should be returned.”

He lamented that the Benin bronzes had been dispersed all over the world since each individual plaque was “like a page in a book” describing the tale of Benin.

He went on to say that curators at some of the institutions that house the bronzes have given inaccurate descriptions of the scenes they show in an effort to make the artifacts fit with western expectations, inflicting even more pain on his country.

Thousands upon thousands of ritual and ceremonial artifacts were taken during the British invasion, depriving the people of their significance. It was determined that these items qualified as “spoils of war,” and they were shipped to the United Kingdom for sale or distribution to the raiding troops.

Many of these may be seen in museums around the United Kingdom, Europe, and the United States. Many people participated in auctions organized around the turn of the century to raise money for the trip by bidding on the artifacts.

The Horniman’s founder, Frederick Horniman, bought two of the returned artifacts from an individual who participated in the looting a month after the raid. Two years later, more were bought from a neighbor.

The British Museum is home to a sizable number of Britain’s Benin Bronzes (900) because of its extensive collection.

Since the 1930s, the Nigerian government has been requesting that museums return these priceless items of art.

According to the media description, 125 years ago, the Benin bronzes were taken from what is now Nigeria.

This summer, Germany and Nigeria announced a historic deal to transfer ownership of German museums’ collections of more than 1,000 objects stolen from Benin. Items were also returned by France.

Glasgow Life, a British museum, is finishing up preparations to repatriate 17 artifacts from Benin.

Other universities, including Oxford and Cambridge, are taking the same measures.

Calls for museums to acknowledge the effects of British colonization and pillage are growing.

Repatriation and restitution are hot topics right now, whether the topic at hand is the fate of artifacts plundered from Africa or the desire for the return of the Parthenon Sculptures to Greece (or Elgin Marbles, as they were often better known).

“Decisions pertaining to the maintenance and administration of their collections are a matter for the trustees of each museum,” stated a representative for the Department of Digital, Culture, Media, and Sport.

However, unlike other British national institutions, the Horniman (winner of Art Fund Museum of the Year in 2022) is not subject to the same regulations he concluded.