The Benin Monarch, His Royal Majesty, Omo N’Oba N’Edo, Uku Akpolokpolo, Ewuare II, Oba of Benin yesterday signed and received Deed of Transfer of the return ‘Okpa’ (Cockerel) and ‘Uhunwun Elao”, two ancient Benin Bronze works which were parts of the looted artifacts during the 1898 invasion from the United Kingdom Universities. 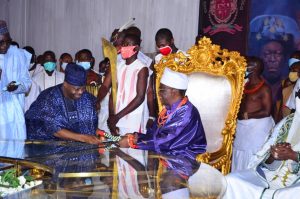 The Oba, however, commended President Muhammadu Buhari, for directing the return of the recently retrieved Benin artifacts to the rightful place, adding that many of the artifacts transcend mere art and are objects of religious significance to the Benin Kingdom.
The Oba, during the event which coincided with his fifth Coronation anniversary cum birthday celebration said that Benin art and culture reflect the past and present glory as well as the splendor of the Kingdom.
“I am happy to welcome you all to the 5th anniversary of my ascension to the throne of my forefathers as the 40th Oba of Benin in a continuous dynasty that dates back to 1170.
“The celebration of this my 5th coronation anniversary coincides with a major event. Today we have in our midst the Nigeria High Commissioner to the United Kingdom, Ambassador Sarafa Tunji Isola.
“I am sure that most of us followed the recent local and international media coverage of the return of two ancient bronze works from UK Universities. These bronzes are a Cockerel or Okpa from Jesus College, Cambridge University, and an ancestral head or Uhunwun Elao from the University of Aberdeen, Scotland.
“I am here With the support of my ancestral, to sign the relevant Deed of Transfer on behalf of my people. I will like to thank His Excellency, President Muhammadu Buhari, GCFR, the President and Commander-In-Chief of the Armed forces of the Federal Republic of Nigeria for graciously directing the return of these recently retrieved artifacts to their rightful place.”, he said.
He stated that as the artifacts which he described as ‘our treasures’ are returned, youths in the state would be able to establish a new relationship with the heritage bequeathed by their forefathers, adding that the return of the artifacts would begin a new era of Benin history and civilization.
While calling on other countries seeking to return other stolen Benin artifacts to deal directly with Benin Palace or the Federal Government who will hold them in trust and return same to the Palace, Oba Ewuare II, said: “We have seen 2017 developed plans to build Benin Royal Museum to house returned artifacts”.
He, however, sued for partners across the world to join hands with the Palace toward creating development programs for the youths, maintaining that: “We have a vibrant youth population whom we know can compete globally if given the proper enabling environment”.
Earlier in his welcome remark, Ambassador Isola, who represented the President said that the formal return of the historical artifacts to the Benin Palace signified the breakthrough in the desires and needs of Nigerians Africans to repossessed African artworks currently domiciled outsides their palace of origin.
“My presence in Benin City today (yesterday) is in fulfillment of the desire and express directives of President Muhammadu Buhari, GCFR Commander-In-Chief of the Armed forces of the Federal Republic of Nigeria to return the repossessed artifacts to where they were originally looted from”, he said.
(Visited 41 times, 1 visits today)
Spread the love
Tags: #LagosUnrest #AgegeUnrest #AgegeBenin CityEdo StateNigeriaOba place