Apparently, a housekeeper in Delta was assaulted by her employer after she “mistakenly broke a frame” (video)

Apparently, a housekeeper in Delta was assaulted by her employer after she “mistakenly broke a frame” (video)

by Mavin Plus
in crime, news
0

Mrs. Blessing Enuewegu, who has been named as the victim, was allegedly beaten to a pulp by her employer in the state of Delta after she broke a frame by accident.

Comrade Israel Joe, a human rights activist, verified the occurrence in a Facebook post on Sunday, November 20, 2022. He stated that the victim worked as a cleaner for the affluent guy, who was 52 years old, in Ekpan, which is located in the Uvwie Local Government Area of the state. 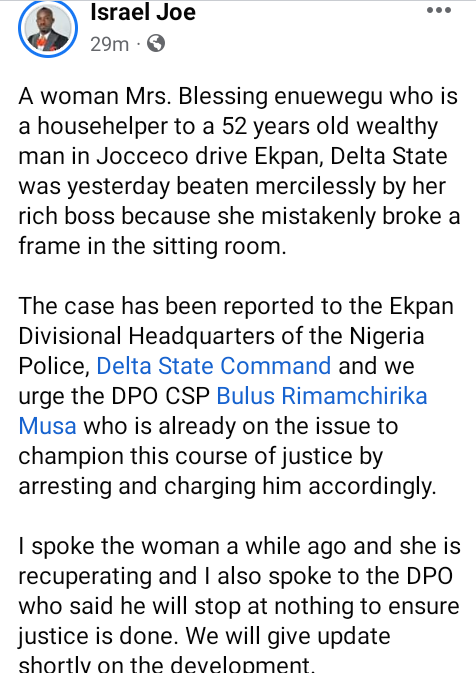 “The case has been reported to the Ekpan Divisional Headquarters of the Nigeria Police, Delta State Command, and we are urging the DPO CSP Bulus Rimamchirika Musa who is already on the issue to champion this course of justice by arresting and charging him accordingly. “I spoke to the woman a little while ago, and she is recovering, and I also spoke to the DPO who said he will stop at nothing to ensure justice is done. Regarding the latest developments, we will provide an update as soon as possible.”